Mark Condren is an award-winning photographer from Castletownroche, a small town in Co Cork, Ireland. Born in 1978, he has been a press photographer for almost two decades and has won the Irish Press Photographer of the Year award five times and also an European policing photography award. He currently works for Ireland’s largest selling newspaper, the Irish Independent. His work has taken him all over the world, from covering famines in Ethiopia and South Sudan, the aftermath of earthquakes in Haiti and Nepal, and war zones in Syria, Gaza Strip, and Western Sahara. 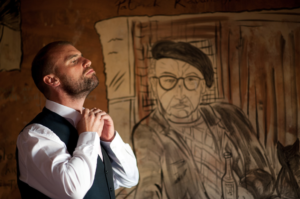 NYPD, Behind the scenes with the men and women of the New York City Police Department is his second photography book. His first, The Guards, was a collection of photographs of the Irish police force at work. It was published in 2011, and went straight to number one in the Irish book charts, selling out in two weeks.